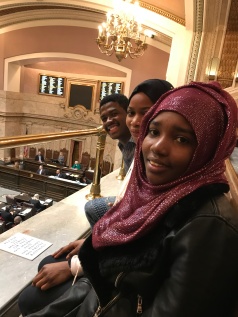 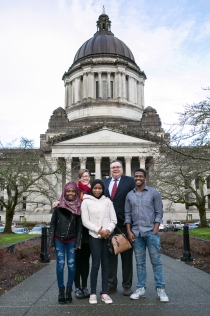 Rep. Volz with guests at the Washington State Capitol in Olympia, Jan. 23, 2018. 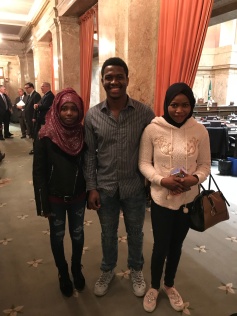 What happens when you take three outstanding former students to the state capital to speak on behalf of public education and English Language Learners? Pure magic! This is the story of how one teacher ended up taking three students to our state capital to meet with legislators.

It started with an idea. For two years I had been working to get my local legislators to visit my classroom. I called their offices and left messages and emailed regularly, but to no avail. It was at a National Board Hill Day in February 2017, that I decided to change my message. Instead of asking, I would entice my legislators by focusing on the great things happening in our public schools and, specifically in my school and in my classroom (read more about this here on Stories from School). This shift resulted in several visits from Spokane’s legislators. 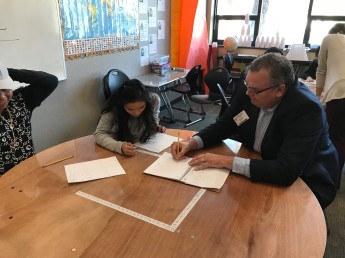 One of the first was a visit from Mike Volz, a freshman Representative from the 6th district, in late May of 2017. After spending the afternoon in our class, Representative Volz was taken with the students and the experience and wanted to bring that back to the capital. So began the plan to bring my class to Olympia.

We stayed in touch over the summer, via my newsletters and intermittent email, then, in the fall, after being selected as the Teacher of the Year, things kicked into high gear. Mike asked to visit again and during that visit, we solidified plans for the visit to Olympia. Instead of bringing my class, as originally discussed, we decided it might be more beneficial for legislators to see students who started in the Newcomer Center, but have now gone on to post-secondary education and can talk about what barriers they faced and what helped them most during high school.

On January 22, 2018. I, along with three former students, hopped in the car and headed to the state capital. Philip Janz, Mike Volz’s aide, had an entire agenda planned, including a parking spot – which made us feel very important.

We started the day with a visit to Representative Linda Dolan. Linda is a former educator from Spokane. During our visit, we discovered that she was instrumental in starting the newcomer program in Spokane in the late 1990’s. She enjoyed meeting the students and knowing they started their education in the US in the Newcomer Center. Later when we spoke to the House K-12 committee, Representative Dolan commented o how wonderful it is to see the success of a program she helped to create. 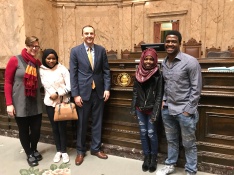 We then visited Representative Marcus Riccelli. He represents the area in which all of us live in Spokane. He was so kind and welcoming and really listened to the students. He even wrote notes as he listened, explaining that while he was not on the education committee, he would pass along some of what he discovered in listening to the students stories and concerns. He also handed each one his card, explaining he is their representative and should they need assistance, they should reach out. This was a powerful message to the students, as they began to recognize their place and their potential impact on policy.

Our busy day next took us to visit both the House Republican and Democratic Caucuses. The caucus is where all of the discussion happens prior to heading out on the floor for debate and voting. While we did not get to witness any of the discussion, we did receive a warm welcome in each caucus and Representative Volz presented me with a resolution he sponsored concerning recognition of my selection as 2018 Washington State Teacher of the Year.

The students and I had the chance to speak about our experiences in front of the entire House body via the caucuses. It was really cool and made a huge impression on the students. I’m sure the students also made a huge impression on the members of the House of Representatives, as well. One legislator, Representative Lovick, from the 44th district, rushed out after our visit to the Democratic Caucus, to take a photo with us and give each of the students his cards, asking them to please reach out to him in the future, that he would love to hear more of their stories.

After a very quick visit to see Senator Billig, and an educational lunch in the legislative cafeteria with Representative Volz, we headed to the House K-12 and Senate K-12 Committee meetings. The students addressed both committees. The students shared their stories of starting their high school journeys in the Newcomer Center and where they all landed. Both Safa and Asraa are sophomores at Eastern Washington University. Safa is studying to become an elementary school teacher, and Asraa is studying Dental Hygiene. Jeff is an Act Six Scholar at Whitworth University. He is a junior and studying sociology. They went on to explain what helped them the most throughout high school (their English language teachers and college achievers programs), and the largest barriers they encountered (standardized testing and access to apprenticeships and mentoring). They provided legislators a unique look into the experiences of English language learners, and, hopefully, inspired them to make positive change for our immigrant and refugee students. 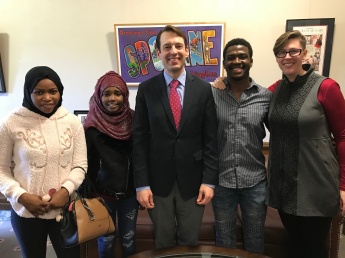 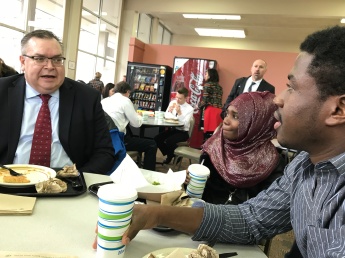 This is the impact students can have when we provide them an opportunity to have a voice. Sure, I could’ve visited the capital on my own as I have in the past, but the true impact on our legislators came through hearing directly from students about their experiences. This visit was also impactful for Jeff, Safa, and Asraa, as they learned they can speak for their communities and make a difference. Such an incredible experience and one I hope to make a tradition.

Reach out to legislators. Give your students the opportunity to share their stories. It really can impact policy and lead to positive changes in our public schools!

← I am a math teacher!
Denisha Saucedo: Making Connections →

One Comment on “Giving Students Voice in State Government”